As part of National Apprenticeship Week 2022, we invited our current apprentices to be interviewed for our ‘Meet TeamMK’ series.

Hayden Sinclair is an Apprentice Software Engineer at MK Test Systems and joined us in September 2021.  Never knowingly over-dressed, Hayden has worn shorts every day since he joined #TeamMK.  He’s confident, enthusiastic and has been a great addition to the software team.

I asked Hayden about his work experience and school experience prior to joining MK Test.  He sees his apprenticeship very much as very much the start of a career for him, so what led him to this point?

“At school, I liked learning and I liked to be challenged – my favourite subject was science, although I did best at photography!  Prior to starting at MK, I was a fitter in Halfords, fitting stereos and stuff like that, so there was some electrical knowledge. But I felt like I’d reached the limit of what I could learn there, so I wanted a change.”

Route to a career

So why software?  And why an apprenticeship?  “A role in software or digital was the way forward for me. It’s going to be massive and that’s the way I want to go – looking into the future.  An apprenticeship made sense for me as I was used to earning money.  This way, I get to still have a job but get practical training and qualifications too.”

Life at MK Test as an Apprentice Software Engineer

We then talked about how Hayden has found life at MK so far, and the differences between what he’s learning at college versus with us.  “It’s been a huge learning curve which is great. I came in here knowing basically nothing and already I’ve learned so much. I didn’t realize that I’d be learning both the actual software development side and the business side, learning about aircraft and what happens in the testing phase for them. So that’s massive for me.” 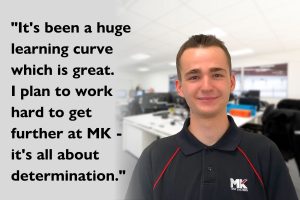 “It’s been a huge learning curve which is great. I’m learning software development as well as about the business side of things. I plan to work hard to get further at MK – it’s about determination.”

“College is more theory based, so it’s completely different to MK.  I get to take what I’ve learned at college and implement it here; that’s what MK is teaching me to do.”

Hayden goes to college one day a week and works at MK’s head office for the other 4 days.  He’s described his typical working day as being very much part of

the team and has an established role within the workflow of the software development. His role right now is to test changes made by the other developers. So far, he’s worked on some bug fixes and will be progressing to changing code and working on unit testing in the next month.

To end our interview, I asked Hayden the big question – where would he like to be in 5 years, career-wise?  “I’m hoping to still be at MK. I’m currently on a two year apprenticeship, so I’ve got basically a year and a half left.  And then after that, there’s a chance to progress to a level six, which is a degree-level course. So that will take me a couple more years as well.  The plan is to stick to what I’m doing and work hard to get further.  It’s down to determination.”