This article continues our series of blog posts highlighting the benefits of the ExLRT (model XLR-9703-01) compared to the LRT (model 906-10246-3).  So far, we’ve looked at the physical differences and how suitable each tool is for use in [MRO facilities].   We’ve now arrived at the critical feature – Intrinsic Safety credentials.

What does Intrinsic Safety mean?

In summary, Intrinsic Safety is defined as “a protection technique for safe operation of electrical equipment in hazardous areas by limiting the energy, electrical and thermal, available for ignition.”

To understand what the term means specifically for the aviation industry, visit [this article]. [link to BLOG-2019-4b]

With regards to loop resistance tools, it’s simple – the ExLRT is certified as Intrinsically Safe in line with all global standards whereas the LRT isn’t. We could just end this article here, but it doesn’t make for a very satisfying read!

Let’s take a closer look at what this certification means for MROs, and how it differs from the legacy LRT.

Intrinsic safety around the world

Where you are in the world will determine which Intrinsic Safety standards the ExLRT must comply with.  But it ultimately doesn’t really matter, as it’s certified for all four global standards, satisfying requirements for the entire planet.  And that’s something the legacy tool – the ‘yellow box’ LRT – does not claim.

The map below shows which standard each region conforms to.  If you already know this, skip to the next section for details of each set of standards. 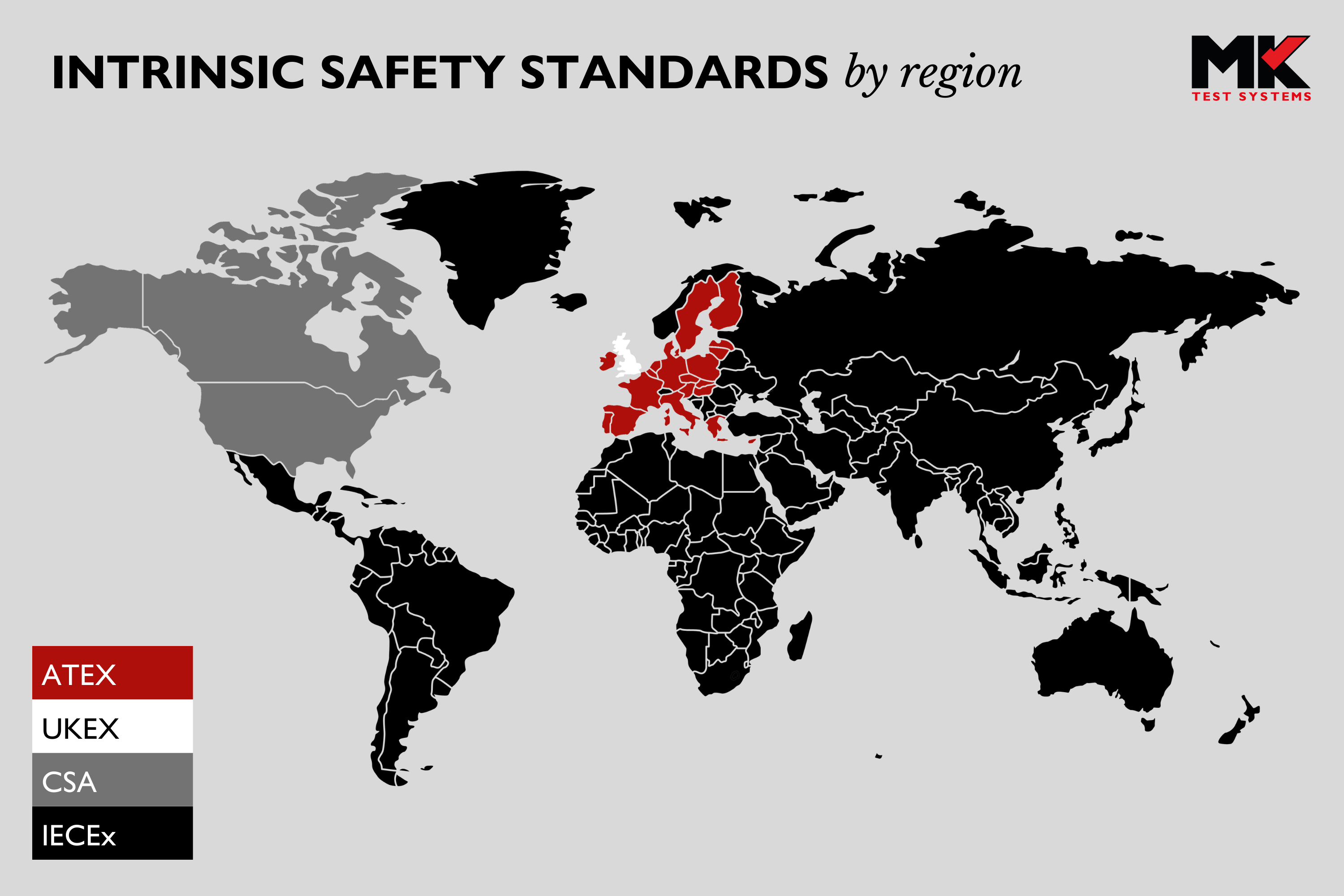 In the EU the standard for intrinsic safety certification is the CENELEC standard EN 60079-11, which is certified according to the ATEX directive. The ExLRT is certified as Intrinsically Safe to ATEX standards.

[View the ATEX certificate for the ExLRT]

The UK was previously covered by the EU’s ATEX directive. Following Brexit, it now has its own standard for Intrinsic Safety, called UKEX. The technical requirements of the UKEX Regulations are identical to ATEX.  The ExLRT is certified as Intrinsically Safe to UKEX standards.

[View the UKEX certificate for the ExLRT]

In Canada and the USA, a number of accredited third-party providers are classified as Nationally Recognized Testing Laboratories (NRTLs).  These NRTLs are approved to certify certain categories of products, devices, assemblies or systems as safe for use in the workplace.  Products which are certified as intrinsically safe by an NRTL bear a ‘CSA’ mark to signify compliance with US and Canadian standards.

MK Test Systems have selected QPS as our service provider for the US and Canada certification.  The ExLRT is certified as Intrinsically Safe to QPS standards.

[View the QPS certificate for the ExLRT]

Rest of the World – IECEx:

[View the IECEX certificate for the ExLRT]

Is there a difference between the different Intrinsic Safety standards?

It’s important to note that Standards agencies around the world engage in harmonization activity so that intrinsically safe equipment manufactured in one country may be approved for use in another. Independent testing ensures that electrical equipment is not only designed to be intrinsically safe, and meets all required standards for intrinsic safety.

The table below shows the classification zones according to all three standards. Based on the location of the equipment, the equipment needs to comply with the requirements for that zone. 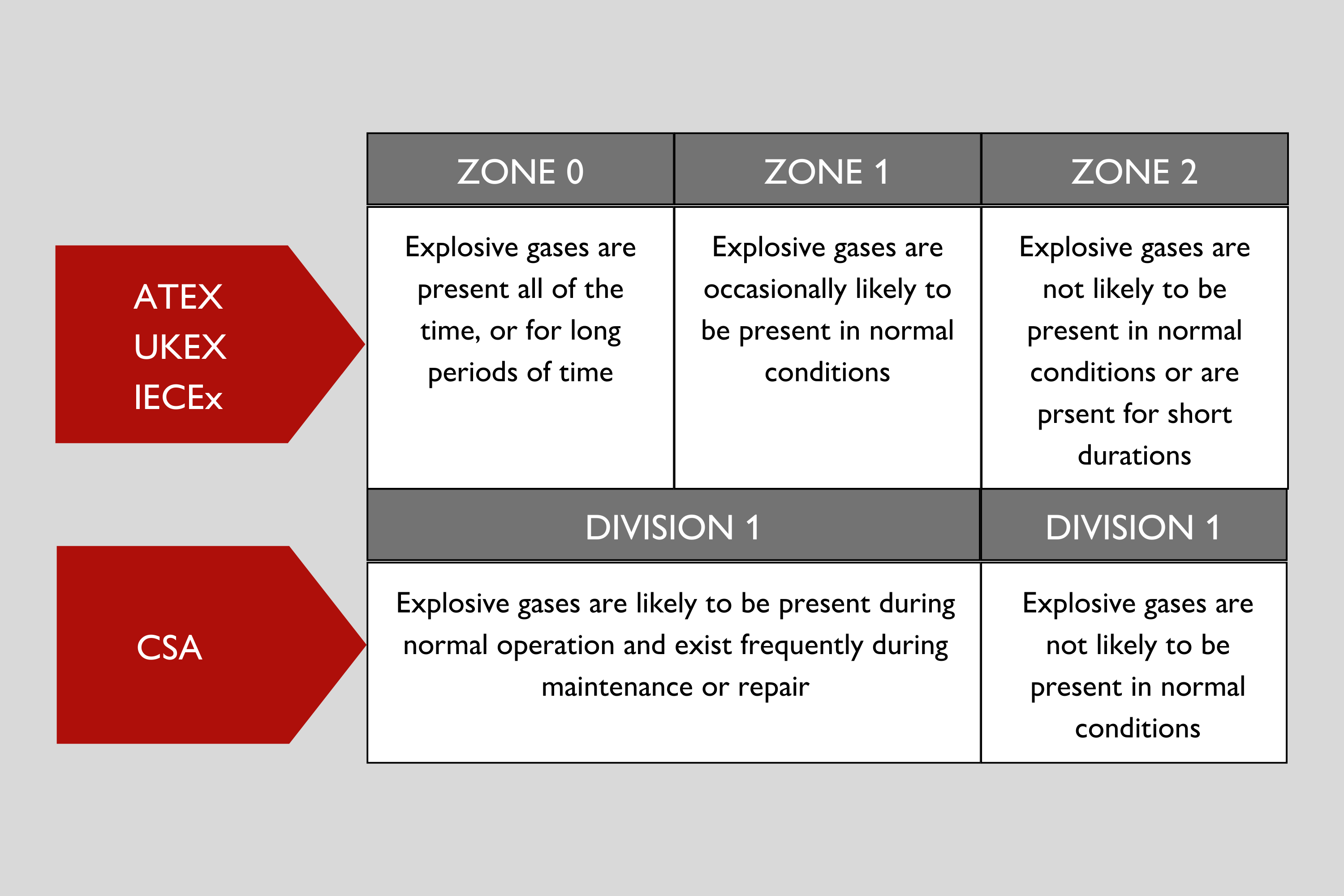 Is the ‘yellow-box’ LRT intrinsically safe?

We mentioned earlier that the legacy LRT isn’t a globally Intrinsic Safe tool; let’s look at what we mean by this.

Details of the Intrinsic Safety classification of the LRT are not in the public domain.  The LRT is not listed on the OEM manufacturer’s website, implying it is no longer being actively marketed; questions remain about its continued technical support.

The most recent information from the manufacturer – published in 2018 – states the LRT “can be utilized in…Division 2 areas around fueled aircraft”. The spec sheet for the LRT released in 2011 showed Division 1 certification.  This means the Intrinsic Safety classification has been downgraded in the 7 years between these two documents.

A quick reminder here that the ExLRT is certified for Division 1.  There is no ambiguity over this, and we’re proud to share our Intrinsic Safety certificates.

So that’s it. The ExLRT is a light, modern loop resistance tester designed with end-users in mind. It’s internationally recognised as an Intrinsically Safe LRT. It can be operated by a single user and it’s approved by Boeing.